Why has scientific medicine, a dazzling success in so many other domains, gotten nowhere with addiction? Why has no broad social consensus emerged on what addiction is, what causes it, or what should be done about it? Why does addiction keep increasing everywhere? The reason is that society has focused too single-mindedly on drugs and on addicted individuals. The primary cause of addiction is not to be found in either “addictive” drugs or individual psychological defects, but a particular kind of social dysfunction.

Addiction can be quite rare in a society for centuries, and then become almost universal when circumstances change, for example, when a tribal culture is destroyed or a highly developed civilization collapses. When addiction becomes commonplace in a society, people become addicted not only to alcohol and drugs, but also to a thousand other destructive pursuits: money, power, dysfunctional love relationships, political and religious fanaticism, games, food, and on and on. Of course there are individual differences in vulnerability, but they should not be in the foreground of attention, because history has shown that social determinants are more powerful.

The Globalization of Addiction shows that the social circumstances that spread addiction in a conquered tribe or a falling civilization are also built into the globalizing free-market society that is sweeping the planet. Global free-market society is magnificently productive – between recessions – but it subjects people to irresistible pressures towards individualism and competition, tearing rich and poor alike from the close family, cultural, and spiritual ties that have always constituted the fabric of human life.

People adapt to chronic dislocation by finding the best substitutes for a sense of belonging, meaning, and identity that they can, and addiction can serve this adaptive function all too well. Therefore, the most effective response to the growing addiction problem is a social and political one, rather than a drug prohibition or individual intervention. This social and political response would not attempt to destroy capitalism. Rather, it would restructure mixed economies with enough imagination to enable more people to find adequate meaning and social integration in everyday life. Then great numbers of people would not need to fill painful inner voids with addiction. 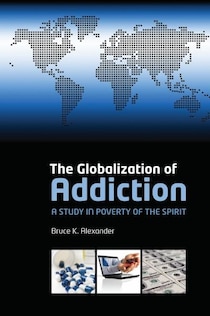