This book is about journalism’s transformation from a twentieth century mass-media structure to something profoundly more grassroots and democratic. It’s a story, first, of evolutionary change. Humans have always told each other stories, and each new era of progress has led to an expansion of storytelling.

This is also a story of a modern revolution, however, because technology has given us a communications tool kit that allows anyone to become a journalist at little cost and, in theory, with global reach. Nothing like this has been remotely possible before.

In the twentieth century, making the news was almost entirely the province of journalists, the people we covered, or “newsmakers” and the legions of public relations and marketing people who manipulated everyone. The economics of publishing and broadcasting created large, arrogant institutions, – call it Big Media, though even small town newspapers and broadcasters exhibit some of the phenomenon’s worst symptoms.

Big Media, in any event, treated the news as a lecture. We told you what the news was. You bought it or you didn’t. You might write us a letter; we might print it. If we were television and you complained, we ignored you entirely unless the complaint arrived on a libel lawyer’s letterhead. Or you cancelled your subscription or stopped watching our shows. It was a world hat bred complacency and arrogance on our part. It was a gravy train while it lasted, but it was unsustainable.

Tomorrow’s news reporting and production will be more of a conversation, or a seminar. The lines will blur between producers and consumers, changing the role of both in ways we are only beginning to grasp now. The communication network itself will be a medium for everyone’s voice, not just the few who can afford to buy multimillion-dollar printing presses, launch satellites, or win the government’s permission to squat on the public’s airwaves.

The evolution, – from journalism as lecture to journalism as a conversation or seminar, – will oblige the various communities of interest to adapt. Everyone, from journalists to the people we cover, to our sources and the former audience, must change their ways. The alternative is just more of the same.

We can’t afford more of the same. We can’t afford to treat the news solely as a commodity, largely controlled by big institutions. We can’t afford as a society, to limit our choices. We can’t even afford it financially, because Wall Street’s demands on Big Media are dumbing down the product itself.

Dan Gillmor
from the introduction of We the media
Grassroots journalism by the people, for the people 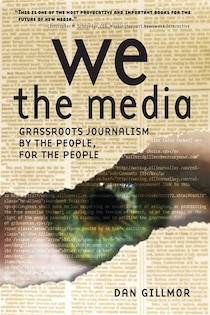