Three concepts seem to me essential in creating, stabilizing and strengthening democracy around the world, including among the people in Africa and Asia with whom I have worked in the past. These concepts are meritocracy, pluralism, and civil society. What role can Canada play, drawing upon its national genius, in creating or enhancing these great underpinnings of democracy in the developing world?

A recent UN audit of democracy, covering eighteen Latin American countries, reemphasizes the virtues of democracy in advancing human development. But it also warns that stagnant per capita incomes and growing inequality, in access to civil rights as well as in income, are producing doubt, impatience and civil unrest.

Thus the report underlines a key concept that you will all know instinctively and that my experience working in the developing world has illustrated decade after decade: the primary daily concern of peoples everywhere is their quality of life, which is intimately connected to their value systems.

The report recognizes a crucial fact: “An important relationship exists between citizenship and organizations of civil society, which are major actors in the strengthening of democracy, in the oversight of government stewardship, and in the development of pluralism.” The UN’s detailed assessment in Latin America is that a democracy cannot function reasonably without two preconditions.

The first is a healthy civil society. It is an essential bulwark that provides citizens multiple channels through which to exercise effectively both their rights and their duties of citizenship. Even at a very basic level, only a strong civil society can ensure both isolated rural populations and the marginalized urban poor a reasonable prospect of humane treatment, personal security, equity, the absence of discrimination, and access to opportunity.

The second precondition is pluralism. Pluralism means peoples of diverse backgrounds and interests coming together in organizations of varying types and goals, for different forms of creative expression, which are valuable and deserving of support by government and society as a whole.

The rejection of pluralism is pervasive around the globe, and this rejection plays a significant role in breeding destructive conflicts. Examples are scattered across the world’s map: in Asia, in the Middle East, in Africa, in Europe, in the Americas. No continent has been spared the tragedies of death, of misery, or of the persecution of minorities. Are such high-risk situations predictable? If the answer is yes, then what can be done about them, to pre-empt the risk that the rejection of pluralism will become the spark that sets human conflict aflame? Is the onus not on leadership, in all parts of the world, to build a knowledge base about such situations and consider strategies for preventing them? I deeply believe our collective conscience must accept that pluralism is no less important than human rights for ensuring peace, successful democracy, and a better quality of life.

His Highness, The Aga Khan
from Where Hope Takes Root
Democracy and Pluralism in an Interdependent World 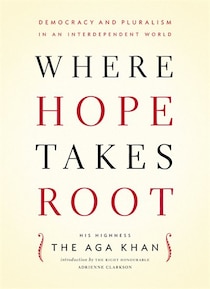